Thoughts of October in the Lower Susquehanna River Watershed bring to mind scenes of brilliant fall foliage adorning wooded hillsides and stream courses, frosty mornings bringing an end to the growing season, and geese and other birds flying south for the winter.

The autumn migration of birds spans a period equaling nearly half the calendar year.  Shorebirds and Neotropical perching birds begin moving through as early as late July, just as daylight hours begin decreasing during the weeks following their peak at summer solstice in late June.  During the darkest days of the year, those surrounding winter solstice in late December, the last of the southbound migrants, including some hawks, eagles, waterfowl, and gulls, may still be on the move.

During October, there is a distinct change in the list of species an observer might find migrating through the lower Susquehanna valley.  Reduced hours of daylight and plunges in temperatures—particularly frost and freeze events—impact the food sources available to birds.  It is during October that we say goodbye to the Neotropical migrants and hello to those more hardy species that spend their winters in temperate climates like ours.

The need for food and cover is critical for the survival of wildlife during the colder months.  If you are a property steward, think about providing places for wildlife in the landscape.  Mow less.  Plant trees, particularly evergreens.  Thickets are good—plant or protect fruit-bearing vines and shrubs, and allow herbaceous native plants to flower and produce seed.  And if you’re putting out provisions for songbirds, keep the feeders clean.  Remember, even small yards and gardens can provide a life-saving oasis for migrating and wintering birds.  With a larger parcel of land, you can do even more.

The NOAA National Weather Service radar images from last evening provided an indication that there may be a good fallout of birds at daybreak in the lower Susquehanna valley.  The moon was bright, nearly full, and there was a gentle breeze from the north to move the nocturnal migrants along.  The conditions were ideal.

The Riparian Woodlands at Conewago Falls were alive with migrants this morning.  American Robins and White-throated Sparrows were joined by new arrivals for the season: Brown Creeper (Certhia americana), Ruby-crowned Kinglets (Regulus calendula), Golden-crowned Kinglets (Regulus satrapa), Dark-eyed Junco (Junco hyemalis), and Yellow-rumped Warbler (Setophaga coronata).  These are the perching birds one would expect to have comprised the overnight flight.  While the individuals that will remain may not yet be among them, these are the species we will see wintering in the Mid-Atlantic states.  No trip to the tropics for these hardy passerines.

It was a placid morning on Conewago Falls with blue skies dotted every now and then by a small flock of migrating robins or blackbirds.  The jumbled notes of a singing Winter Wren (Troglodytes hiemalis) in the Riparian Woodland softly mixed with the sounds of water spilling over the dam.  The season’s first Wood Ducks (Aix sponsa), Blue-winged Teal (Spatula discors), Herring Gull (Larus argentatus), Horned Larks (Eremophila alpestris), and White-throated Sparrows (Zonotrichia albicollis) were seen.

There was a small ruckus when one of the adult Bald Eagles from a local pair spotted an Osprey passing through carrying a fish.  This eagle’s effort to steal the Osprey’s catch was soon interrupted when an adult eagle from a second pair that has been lingering in the area joined the pursuit.  Two eagles are certainly better than one when it’s time to hustle a skinny little Osprey, don’t you think?

But you see, this just won’t do.  It’s a breach of eagle etiquette, don’t you know?  Soon both pairs of adult eagles were engaged in a noisy dogfight.  It was fussing and cackling and the four eagles going in every direction overhead.  Things calmed down after about five minutes, then a staring match commenced on the crest of the dam with the two pairs of eagles, the “home team” and the “visiting team”, perched about 100 feet from each other.  Soon the pair which seems to be visiting gave up and moved out of the falls for the remainder of the day.  The Osprey, in the meantime, was able to slip away.

In recent weeks, the “home team” pair of Bald Eagles, seen regularly defending territory at Conewago Falls, has been hanging sticks and branched tree limbs on the cross members of the power line tower where they often perch.  They seem only to collect and display these would-be nest materials when the “visiting team” pair is perched in the nearby tower just several hundred yards away…an attempt to intimidate by homesteading.  It appears that with winter and breeding time approaching, territorial behavior is on the increase.

In the afternoon, a fresh breeze from the south sent ripples across the waters among the Pothole Rocks.  The updraft on the south face of the diabase ridge on the east shore was like a highway for some migrating hawks, falcons, and vultures.  Black Vultures (Coragyps atratus) and Turkey Vultures streamed off to the south headlong into the wind after leaving the ridge and crossing the river.  A male and female Northern Harrier (Circus hudsonius), ten Red-tailed Hawks, two Red-shouldered Hawks (Buteo lineatus), six Sharp-shinned Hawks, and two Merlins crossed the river and continued along the diabase ridge on the west shore, accessing a strong updraft along its slope to propel their journey further to the southwest.  Four high-flying Bald Eagles migrated through, each following the east river shore downstream and making little use of the ridge except to gain a little altitude while passing by. 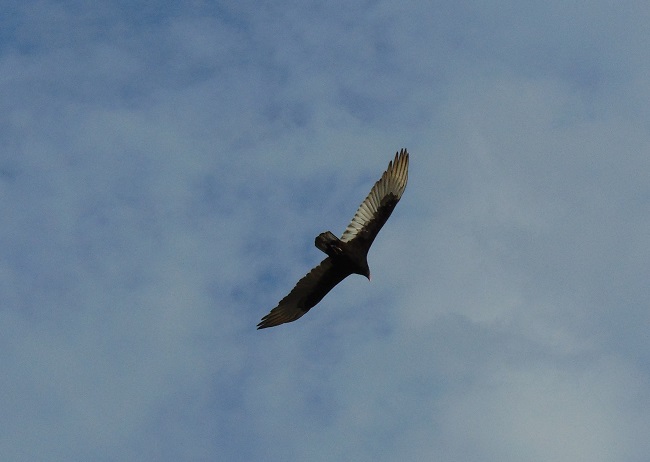 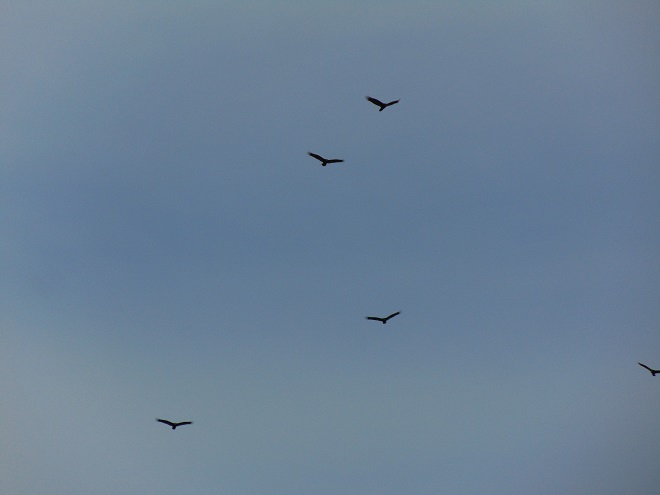 Late in the afternoon, the local Bald Eagles were again airborne and cackling up a storm.  This time they intercepted an eagle coming down the ridge toward the river and immediately forced the bird to climb if it intended to pass.  It turned out to be the best sighting of the day, and these “home team” eagles found it first.  It was a Golden Eagle (Aquila chrysaetos) in crisp juvenile plumage.  On its first southward voyage, it seemed to linger after climbing high enough for the Bald Eagles to loose concern, then finally selected the ridge route and crossed the river to head off to the southwest.

A moderate breeze from the south placed a headwind into the face of migrants trying to wing their way to winter quarters.  The urge to reach their destination overwhelmed any inclination a bird or insect may have had to stay put and try again another day.

The afternoon belonged to the insects.  The warm wind blew scores of Monarchs toward the north as they persistently flapped on a southwest heading.  Many may have actually lost ground today.  Painted Lady (Vanessa cardui) and Cloudless Sulphur butterflies were observed battling their way south as well.  All three of the common migrating dragonflies were seen: Common Green Darner (Anax junius), Wandering Glider (Pantala flavescens), and Black Saddlebags (Tramea lacerata).

The warm weather and summer breeze are expected to continue as the rain and wind from Hurricane Nate, today striking coastal Alabama and Mississippi, progresses toward the Susquehanna River watershed during the coming forty-eight hours.

A fresh breeze from the north brought cooler air and a reminder that summer is gone and autumn has arrived.

Blue Jays continued their hesitant crossings of the river at Conewago Falls.  The majority completed the journey by forming groups of a dozen or more birds and following the lead of a lone American Robin, a Northern Flicker, or, odd as it appeared, a small warbler.

By far the most numerous migrants today were swallows.  Thousands of Northern Rough-winged Swallows and hundreds of Tree Swallows were on the wing in search of what was suddenly a sparse flying insect supply.  To get out of the brisk wind, some of the more resourceful birds landed on the warm rocks.  To satisfy their appetite, many were able to pick crawling arthropods from the surface of the boulders.  They swallow them whole.