A Photographic Identification Guide to the

of the Lower Susquehanna River Watershed

WHERE TO OBSERVE DIURNAL RAPTORS

One can study diurnal raptors almost anywhere in the Lower Susquehanna River Watershed.  Vultures can be seen cruising the skies in search of roadkill and other carrion.  Red-tailed Hawks and American Kestrels can be found in rodent-rich grasslands and pastures.  As farm acreage decreases, the former has transitioned to suburban life and, in many cases, squirrel consumption.  Cooper’s Hawks too, have, in recent years, adapted to life in and around city and town.  Ospreys and Peregrine Falcons, lost entirely as a breeding species for much of the twentieth century, again nest at a few locations along the Susquehanna.  And then there are the Bald Eagles, which again nest not only along the river, but in upland areas as well, often joining vultures and Red-tailed Hawks as carrion-eaters on agricultural lands, even where high-intensity farming is practiced.  Beginning in November each year, a visit to the lower Susquehanna offers an opportunity to examine Bald Eagles, our national emblem, in abundance, particularly at Conowingo Dam where a hundred birds or more often gather during late fall and early winter.  But without a doubt, the best time to learn diurnal raptor identification is during the spectacular autumn migrations when their numbers and variety are at their maximum.  It is during this time that an observer has the opportunity to compare the familiar species with those that are uncommon or are not likely to be encountered during other times of the year.

To save energy while migrating, many raptors, particularly vultures and Broad-winged Hawks, seek out thermal updrafts (air rising above surfaces heated by the sun) to soar upon and gain altitude before gliding away.  Birds using this tactic can be observed from almost any location with an unobstructed view of the sky.  A hill or a rooftop situated along the birds’ flightpath will often suffice.  If you keep a close eye on the skies of the Lower Susquehanna River Watershed during the month of September, you stand a pretty good chance of seeing at least one “kettle” of Broad-winged Hawks passing by—even from your own home!

More often though, migrating raptors seeking to save energy will utilize the updrafts created by winds striking the slopes of the region’s numerous ridges.  These northeast-to-southwest-oriented ridge lines deflect skyward the horizontal flow of the northwest winds that often blow during the days that follow the passage of the cold fronts that motivate birds to move south in fall.  This linear system of rising air creates a network of highway-like “microflyways” that just happen to facilitate travel in the direction many raptors want to go—southwest.  To expedite their journey and expend less energy, opportunistic fliers follow these routes for at least a portion of their trip—entering and exiting at will.  On an ideal day, the raptor traffic can be quite heavy along one or more of these “highways”, much to the delight of any observer fortunate enough to be positioned at a lookout atop a ridge in their path.

Each raptor species, being a bird of prey, is at the top of its food chain and, as such, can be a good indicator of the health of the ecosystems supporting the links in that chain.  It is therefore beneficial to monitor the population trends of raptors as indicators of environmental health.  Hawk counting got its start at Hawk Mountain Sanctuary in 1935 when Maurice Broun began keeping daily records of the migrating raptors seen each autumn.  Hawk Mountain’s data helped reveal the declines of the Osprey, Bald Eagle, and Peregrine Falcon during the 1950s and 1960s due, at least in part, to the effects of D.D.T.  Today, there are sites all over North America where official hawk counts are conducted.  To enumerate the birds migrating along the raptor “highways” of the Lower Susquehanna River Watershed and nearby areas of the Schuylkill River watershed (Hawk Mountain and Blue Mountain Route 183), observers have discovered many advantageous lookouts from which to see moving birds.  Eight of the best are plotted on the map which follows, including four where official counts are currently conducted each autumn.

Excellent autumn flights, particularly on days with winds from the northwest.  Fewer birds but closer looks on southerly winds.  Golden Eagles from late October through November.

Good autumn flights with best numbers on southwest winds—possibly due in part to crossovers from Blue Mountain.  The access road can be rough, but observers can park right next to the lookout—no hiking.

Excellent autumn flights, particularly on days with winds from the northwest.  Museum and interpretive programs offered.  Official counters on duty throughout the fall season and sometimes during spring flights.  Very crowded during peak autumn weekends.  The hike to North Lookout atop Blue Mountain (often called Kittatinny Ridge at Hawk Mountain and at points to the east) is almost a mile.  Admission fee.

A difficult to access site in a gas pipeline right-of-way along the Appalachian Trail.  Good autumn flights.

Good autumn flights, particularly on northwest winds.  Many of the birds counted at nearby Hawk Mountain continue following updrafts along Blue Mountain to also pass this location.

“Furnace Hills” location just east of the former Cornwall Fire Tower Hawk Watch site.  Observations of autumn and spring migrations through the Piedmont highlands can be made from the top of the sixty-six-foot-tall tower or from ground level in the forest clearing that surrounds it.

Viewing from amid the “pothole rocks” in the narrow section of river downstream of Three Mile Island.  This site is accessible only when the river stage at Harrisburg, PA, is below four feet.  During spring and autumn, fair numbers of birds are seen either following the river or the diabase ridge that it intersects here.  Nesting Ospreys, Bald Eagles, and Peregrine Falcons in spring and summer.  Riverine birds year-round.

A site in a powerline right-of-way with a viewing platform and interpretive displays.  One of the few locations with good autumn flights on northeast winds.

Further afield, these regional hawk watch sites are worth a visit:

IN THE RIDGE AND VALLEY PROVINCE

IN THE APPALACHIAN PLATEAUS PROVINCE

Site overlooking the Susquehanna River valley from along the western edge of the Catskill Mountains.  Autumn flights including Golden Eagles from late October through November.

IN THE PIEDMONT PROVINCE

Spring and fall flights.  Kite and shorebird watch in late May/early June.  No official autumn count since October of 2020.

IN THE ATLANTIC COASTAL PLAIN

Site atop a beachside World War II-era bunker in Cape Henlopen State Park.  Excellent autumn raptor flights—plus sea watching for birds and cetaceans.  Falcons from late September into October.  Some birds arrive after coming south along the western shore of Delaware Bay; others make landfall after crossing the mouth of the bay from Cape May.

Site with a viewing platform adjacent to the lighthouse parking area in Cape May Point State Park.  World-renowned autumn birding and hawk watching.  Northwest winds bring the southbound raptors right down the beach.  Falcons from late September into October.  Birds of all kinds get stalled and “pile up” around Cape May before attempting to cross Delaware Bay.  Something unusual always seems to show up.

Site along the western shore of Chesapeake Bay at the mouth of the Patapsco River.  Spring migration on southwest winds.

Site on Chesapeake Bay near the southern tip of the Delmarva Penninsula.  Phenomenal flights of raptors and other migratory birds in autumn.  Rarities surprise observers with some regularity.

Hawk watching from the top of a stone tower.  Spring and fall flights.

TOPOGRAPHY OF A DIURNAL RAPTOR IN FLIGHT 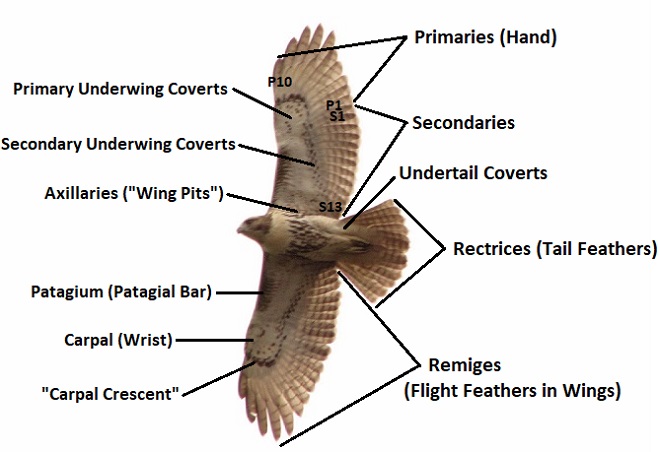 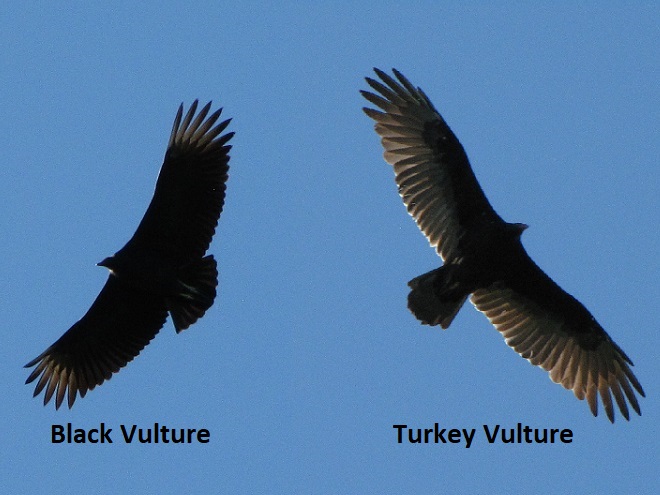 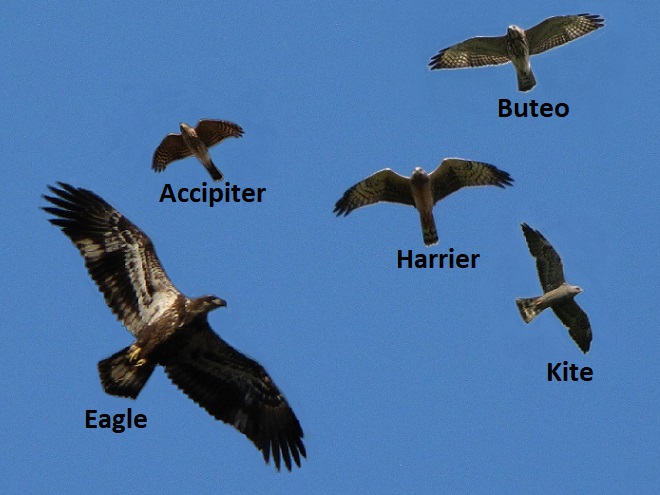 NOTE:  The term sub-adult, here applied only to a fifth-year eagle, is sometimes applied to birds in their second through fifth years, and on occasion includes first-year/juvenile eagles as well. 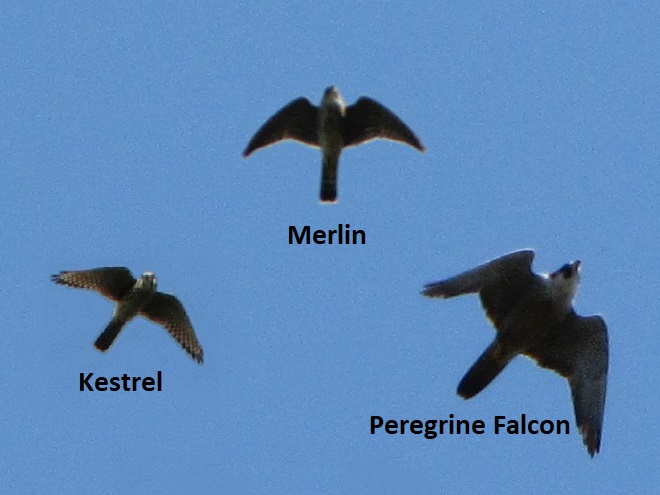 The perceived visual appearance of raptors in flight can be altered significantly by many conditions including observation angle, distance, lighting, prevailing weather, and a bird’s behavior and flight posture.  Furthermore, some birds do look different than “normal”.  In addition to the variation among individuals regularly occurring in a region, strays from more distant populations possessing unfamiliar traits may wander into an observer’s area from time to time and provide an experience that’s somewhat confounding.  Familiarity with molt cycles and the resulting seasonal changes in plumage can be an asset for identifying and determining the age of a diurnal raptor.  But these changes are not set in stone.  The timing of feather molt can be impacted by genetic variation, nutrition, stress, breeding/nesting activity, and other factors.  Therefore, the information found on this page should be considered as a photographic reference and general overview of field marks presented to familiarize the observer with the basics of identifying and possibly determining the age of a diurnal raptor.  But keep in mind, you will encounter individuals that don’t quite fit the mold.

WILL YOU BE ABLE TO ACCURATELY INDENTIFY AND AGE EVERY DIURNAL RAPTOR YOU SEE?