Or maybe I would do what this lady did with her pool.

Or what this lady did.

This is what I’d do. 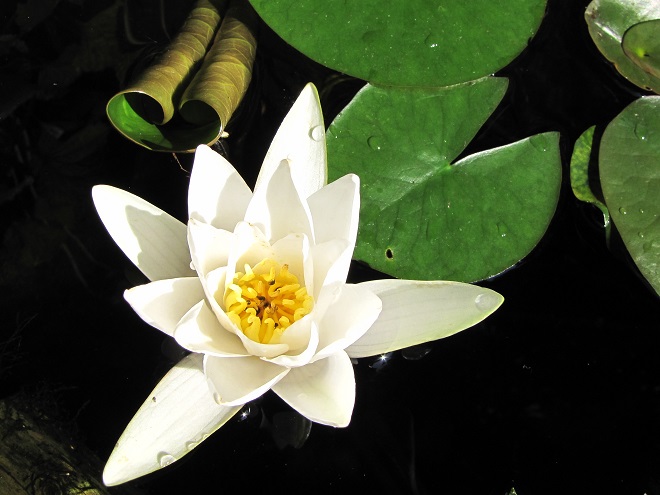 Let’s take a quiet stroll through the forest to have a look around.  The spring awakening is underway and it’s a marvelous thing to behold.  You may think it a bit odd, but during this walk we’re not going to spend all of our time gazing up into the trees.  Instead, we’re going to investigate the happenings at ground level—life on the forest floor.

There certainly is more to a forest than the living trees.  If you’re hiking through a grove of timber getting snared in a maze of prickly Multiflora Rose (Rosa multiflora) and seeing little else but maybe a wild ungulate or two, then you’re in a has-been forest.  Logging, firewood collection, fragmentation, and other man-made disturbances inside and near forests take a collective toll on their composition, eventually turning them to mere woodlots.  Go enjoy the forests of the lower Susquehanna valley while you still can.  And remember to do it gently; we’re losing quality as well as quantity right now—so tread softly.

Inside the doorway that leads to your editor’s 3,500 square foot garden hangs a small chalkboard upon which he records the common names of the species of birds that are seen there—or from there—during the year.  If he remembers to, he records the date when the species was first seen during that particular year.  On New Year’s Day, the results from the freshly ended year are transcribed onto a sheet of notebook paper.  On the reverse, the names of butterflies, mammals, and other animals that visited the garden are copied from a second chalkboard that hangs nearby.  The piece of paper is then inserted into a folder to join those from previous New Year’s Days.  The folder then gets placed back into the editor’s desk drawer beneath a circular saw blade and an old scratched up set of sunglasses—so that he knows exactly where to find it if he wishes to.

A quick glance at this year’s list calls to mind a few recollections. 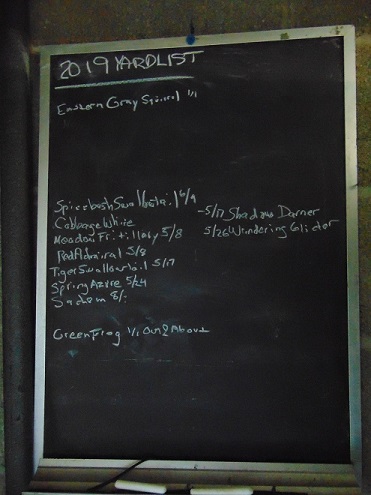 Before putting the folder back into the drawer for another year, the editor decided to count up the species totals on each of the sheets and load them into the chart maker in the computer. 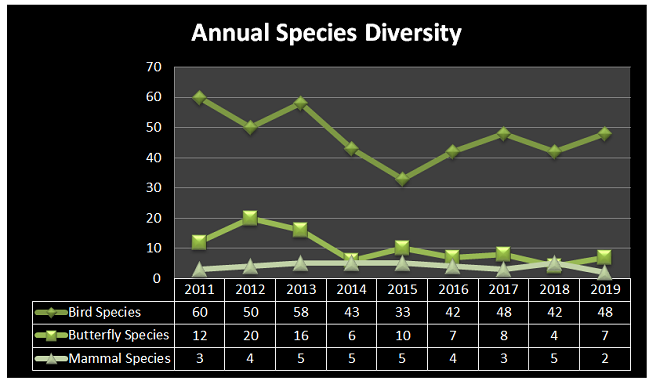 It appears that, at the very least, the garden habitat has been disconnected from the home ranges of many species by fragmentation.  His little oasis is now isolated in a landscape that becomes increasingly hostile to native wildlife with each passing year.  The paving of more parking areas, the elimination of trees, shrubs, and herbaceous growth from the large number of rental properties in the area, the alteration of the biology of the nearby stream by hand-fed domestic ducks, light pollution, and the outdoor use of pesticides have all contributed to the separation of the editor’s tiny sanctuary from the travel lanes and core habitats of many of the species that formerly visited, fed, or bred there.  In 2019, migrants, particularly “fly-overs”, were nearly the only sightings aside from several woodpeckers, invasive House Sparrows (Passer domesticus), and hardy Mourning Doves.  Even rascally European Starlings became sporadic in occurrence—imagine that!   It was the most lackluster year in memory.

If habitat fragmentation were the sole cause for the downward trend in numbers and species, it would be disappointing, but comprehendible.  There would be no cause for greater alarm.  It would be a matter of cause and effect.  But the problem is more widespread.

Although the editor spent a great deal of time in the garden this year, he was also out and about, traveling hundreds of miles per week through lands on both the east and the west shores of the lower Susquehanna.  And on each journey, the number of birds seen could be counted on fingers and toes.  A decade earlier, there were thousands of birds in these same locations, particularly during the late summer.

In the lower Susquehanna valley, something has drastically reduced the population of birds during breeding season, post-breeding dispersal, and the staging period preceding autumn migration.  In much of the region, their late-spring through summer absence was, in 2019, conspicuous.  What happened to the tens of thousands of swallows that used to gather on wires along rural roads in August and September before moving south?  The groups of dozens of Eastern Kingbirds (Tyrannus tyrannus) that did their fly-catching from perches in willows alongside meadows and shorelines—where are they?

Several studies published during the autumn of 2019 have documented and/or predicted losses in bird populations in the eastern half of the United States and elsewhere.  These studies looked at data samples collected during recent decades to either arrive at conclusions or project future trends.  They cite climate change, the feline infestation, and habitat loss/degradation among the factors contributing to alterations in range, migration, and overall numbers.

There’s not much need for analysis to determine if bird numbers have plummeted in certain Lower Susquehanna Watershed habitats during the aforementioned seasons—the birds are gone.  None of these studies documented or forecast such an abrupt decline.  Is there a mysterious cause for the loss of the valley’s birds?  Did they die off?  Is there a disease or chemical killing them or inhibiting their reproduction?  Is it global warming?  Is it Three Mile Island?  Is it plastic straws, wind turbines, or vehicle traffic?

The answer might not be so cryptic.  It might be right before our eyes.  And we’ll explore it during 2020.

In the meantime, Uncle Ty and I going to the Pennsylvania Farm Show in Harrisburg.  You should go too.  They have lots of food there.

The humid rainy remains of Hurricane Nate have long since passed by Pennsylvania, yet mild wet weather lingers to confuse one’s sense of the seasons.  This gloomy misty day was less than spectacular for watching migrating birds and insects, but some did pass by.  Many resident animals of the falls are availing themselves of the opportunity to continue active behavior before the cold winds of autumn and winter force a change of lifestyle.

Warm drizzle at daybreak prompted several Northern Spring Peepers (Pseudacris crucifer crucifer) to begin calling from the wetlands in the Riparian Woodlands of Conewago Falls.  An enormous chorus of these calls normally begins with the first warm rains of early spring to usher in this tiny frog’s mating season.  Today, it was just a few “peeps” among anxious friends.

Any additional river flow that resulted from the rains of the previous week is scarcely noticeable among the Pothole Rocks.  The water level remains low, the water column is fairly clear, and the water temperatures are in the 60s Fahrenheit.

It’s no real surprise then to see aquatic turtles climbing onto the boulders in the falls to enjoy a little warmth, if not from the sun, then from the stored heat in the rocks.  As usual, they’re quick to slide into the depths soon after sensing someone approaching or moving nearby.  Seldom found anywhere but on the river, these skilled divers are Common Map Turtles (Graptemys geographica), also known as Northern Map Turtles.  Their paddle-like feet are well adapted to swimming in strong current.  They are benthic feeders, feasting upon a wide variety of invertebrates found among the stone and substrate of the river bottom.

Adult Common Map Turtles hibernate communally on the river bottom in a location protected from ice scour and turbulent flow, often using boulders, logs, or other structures as shelter from strong current.  The oxygenation of waters tumbling through Conewago Falls may be critical to the survival of the turtles overwintering downstream.  Dissolved oxygen in the water is absorbed by the nearly inactive turtles as they remain submerged at their hideout through the winter.  Though Common Map Turtles, particularly males, may occasionally move about in their hibernation location, they are not seen coming to the surface to breathe.

The Common Map Turtles in the Susquehanna River basin are a population disconnected from that found in the main range of the species in the Great Lakes and upper Mississippi basin.  Another isolated population exists in the Delaware River.